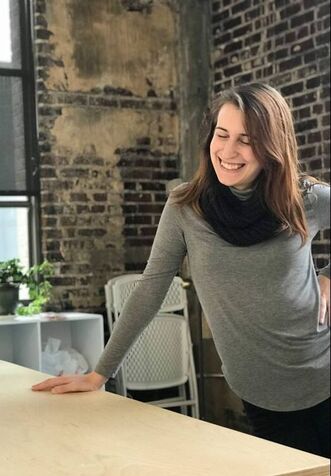 PRODUCING
I have launched my LLC for the production of fully live digital events: Transcend Streaming. While I get the website up and running, you can check out information here.

ABOUT LEANNA
​Leanna Keyes is a playwright & producer based in Memphis, Tennessee and the San Francisco Bay Area. She was a Playwright in Residence at Crosstown Arts in Memphis during spring 2019. Valiant Theatre commissioned her in 2020, which resulted the premiere of Love Serving Love at their annual new works festival in January.

Her play Doctor Voynich and Her Children, an abortion romance family drama, was produced at Uprising Theatre Company in Minneapolis in March 2020). It was going to be produced at Linfield College in Oregon in May, but you can imagine what happened to that idea.

In Chicago, her short play You’re My Person premiered at the Violet Surprise Femmeslash Festival at Otherworld Theatre Company in August 2019. Her play Legal-Tender Loving Care was produced by Fuse Theatre in California in June 2019. In 2018, her play Doctor Voynich and Her Children received collegiate productions at Rhodes College and at Stanford University. Previously produced plays including God Herself Could Not Sink This Ship in 2014 and The Kilogram Play in 2013. She also co-wrote The Real World: Stanford with Olivia Haas, which was produced annually from 2015 to 2017.

Her plays have been studied at universities around the country, including Stanford University, Carnegie Mellon, Rhodes College, Linfield College, the University of Kansas, and Western Carolina University. In 2017, her work was featured at Carnegie Mellon in the curriculum of “American Women Playwrights of the 20th and 21st Centuries.”​

NOTE: Due to the current coronavirus situation, many of my productions have been postponed. Details here.